Our Very Own Gilead - a marsupial tale....

Straight from the pages of the Handmaid's Tale - Sydney has its very own fertility apocalypse, happening now in Campbelltown. The state government's recent rezoning will threaten the last healthy koala population in NSW, forcing breeding matriarchs to face down more killer dogs, roads and habitat destruction.

Elizabeth Farrelly’s recent reference to the sinister connotations of Lendlease’s Gilead development in Campbelltown is more ominous than she may realise. There are indeed fertile handmaidens trying to cross Gilead as we speak, and they are being slaughtered on route, at Appin Road to be exact. This real life "Gilead", til now a heritage landscape unchanged since the convict era, is about to become the site of a marsupial tale of woe. And who is orchestrating this Atwood dystopia for NSW’s only Chlamydia free colony of Koalas ? The Department of Planning!

Even as Premier Gladys Berejiklian touts a new "Koala Strategy" for NSW, this development will destroy vital corridors which have so far allowed the local koala population to avoid lethal contact with humans, their roads and their ancillary threats (dogs, housing estates and other traffic). The fact that Appin Rd on the Campbelltown side will be upgraded to dual lanes has angered wild life carers who are already picking up koala corpses every week.

Help Save Appin community group member Sue Gay said a small group of residents had bended together in an effort to raise funds to launch a legal challenge, questioning the basis of the decision making process to rezone the land, before the end of the year. “We are just a small group of very concerned local honest residents who want to protect and save the beautiful historic working farm in its intactness. Its environment has very sensitive koala corridors surrounding three sides of this property."

“Mt Gilead is uniquely situated between the Georges and Nepean Rivers and currently provides local koalas with a short distance (just a few kilometres) to travel between the two river corridors,’’ says Jeff Angel, the Executive Director of the Total Environment Centre.

“TEC’s view is that the proposed housing development will make it near impossible for koalas to successfully make this crossing, further restricting important koala movement in the region,’’ he said.

“We also understand that in late 2017 ecologists engaged by Campbelltown City Council conducted fauna surveys and found evidence of koalas on the Mt Gilead development site.

“This information is directly relevant to the current public exhibition, yet it has been left out.

The TEC is also critical of the assessment of impacts on the local koalas provided by Eco Logical consultants on behalf of Lendlease Communities (Mt Gilead) Pty Ltd. 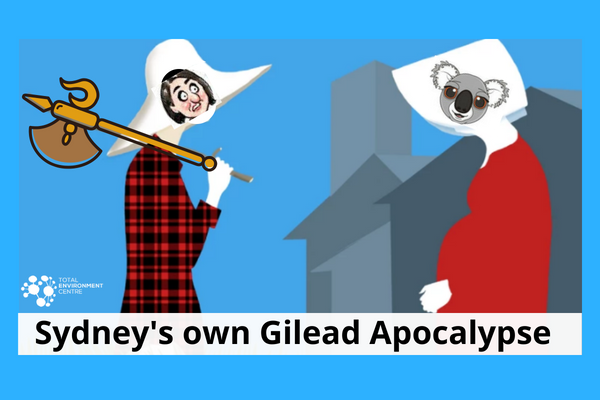