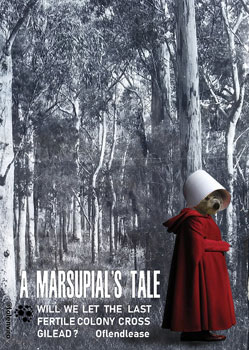 There is a healthy, thriving koala colony in Sydney!

Sydney’s koalas were driven to near extinction back in the 1930s due to the prolific demand for their pelts. But in south west Sydney the defence force at the Holsworthy Military reserve gave sanctuary to a handful of survivors, that were left alone for the next 80 years, allowing the koalas time to recover.

But there was something else wonderful about this isolated little colony - as Chlamydia raged through the Koala populations of the rest of Australia, often leaving them infertile and blind, and sending their population numbers plummeting – this colony’s isolation proved a saving grace as they escaped this pestilence and thrived.

But now, just as this special little koala colony’s numbers have grown, and they are once again venturing out into South Western Sydney around Campbelltown and Appin in search of new habitat, they face new threats.

They are now being killed by cars as they try to cross the treacherous Appin and Heathcote roads. Eight koalas were killed in eight weeks on Appin Road this year, and sadly, for the koalas and the local community, this death toll is increasing. And now there is another threat to their survival, their habitat and corridors are about to be cleared for us...

Thirty thousand new homes and a 6 lane highway upgrade are planned as part of the Macarthur Priority Growth Area. One of these developments is a housing project by Lendlease at Mt Gilead.

The Mt Gilead estate cuts through the closest point between the Georges River and the Nepean River, both vital bushland corridors for koalas and other wildlife. If this development goes ahead as planned it will destroy this vital koala corridor and habitat.

We respectfully bring to the attention of the House the plight of the only Chlamydia free Koala population in the Sydney Basin, in the northern region of Macarthur, between Appin, Campbelltown, Moorebank, Menangle Park, and Sutherland, and to the potential loss or devaluation of Heritage estates in the Campbelltown and Camden areas.

The Macarthur Priority Growth Area plan (MPGA) has disregarded the importance of wildlife corridors between the Georges and Nepean Rivers, and some of the earliest European heritage properties of national importance in the area, being settled as early as 1810.

(1) We request that fencing and wildlife corridors with overhead and underground passes are installed to avoid the high numbers of Koalas being killed on the Appin/Campbelltown Road (eight Koalas have been killed within eight weeks) and that north south corridors are maintained and protected between Noorumba Reserve, Mount Gilead and Beulah including Humewood.

(2) That the MPGA be cancelled or modified to allow the inclusion of full protection for wildlife corridors between the Georges and Nepean Rivers and Mount Gilead a Macarthur-Onslow property, by adding the whole property to the NSW Heritage List, and so as to not devalue associated heritage properties 'Beulah', 'Hume Wood', 'Camden Park House' and the 'Water Canal' by building dwellings on the Mount Gilead property.

The MPGA does not comply with the higher standards set by the Greater Sydney Commission in regard to protection of wildlife, heritage, education and the standard of living of existing and new residents.

Our petition also includes and requests that protection be given to the Wilton/Bargo Koala population which is genetically distinguishable from the northern Macarthur population.

By signing this petition, you agree to receive updates on Save Sydney's Koala campaign