We Must Protect Sydney's Lungs

Sydney-siders traditionally protest loudly whenever their public green space is sold-off or alienated for development. Now a powerful network of community, planning and health organisations has called on the Premier of NSW to protect the lungs of our iconic city, led by Total Environment Centre.

In an open letter to the Premier Berejiklian leaders in Health, Planning, Science, Education, Religion and Community have urged better protection of green spaces and trees from development. 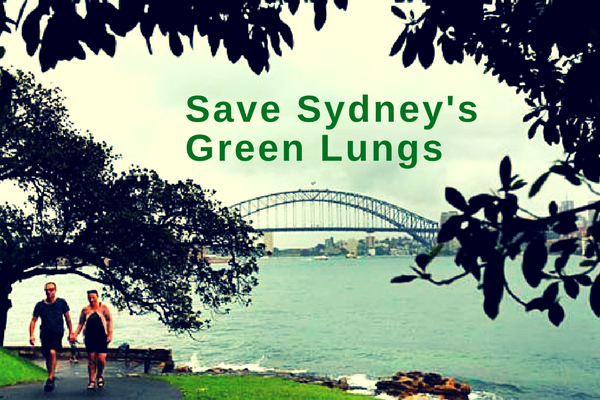 Serious concerns have been raised about the proposed Biodiversity Offsets Scheme which will lead to the widespread clearing of bushland in the Greater Sydney area in return for developers’ cash payments.

“People are right to be alarmed about development projects which destroy urban breathing space,” said TEC’s director Jeff Angel. “The extremely negative impacts on healthy lifestyles and urban heat can't be ignored. The science is in. We need trees and green spaces for healthy citizens. As Sydney grows, bigger parks and more trees are a priority.”

“Sydney’s population is projected to grow to 6.4 million by 2036, so access to safe, convenient and enjoyable parks, sporting facilities and other open space will be crucial for the liveability of our city,” said Mark Tyrrell, President Australian Institute of Landscape Architects NSW.

Mr Tyrrell also wants the State Government to increase the level of investment in the green infrastructure network to allow for better health and wellbeing for people living in dense urban communities.

" A lack of physical activity is one of the risk factors contributing to the growing burden of heart disease,” said the National Heart Foundation’s NSW Division CEO, Kerry Doyle.

“It remains the single leading cause of death in Australia.  Apart from creating vibrant neighbourhoods, good planning can positively impact on our long-term health. Access to green spaces to socialise and play helps to make exercise an enjoyable part of people's every day routine.”

TEC’s SOS Green Spaces Map tracks threatened spaces in over 70 locations across Sydney with detailed information about local trees, native species, and resident action groups. The Map reveals the precious areas that are under the threat of unfettered development.