We have three days! Tree clearing in NSW is going to get more complicated, more destructive and impossible to reverse - yet the NSW Government is hellbent on introducing detrimental new laws this Friday 25th August.

"I would urge everyone who cares about the health of our communities to phone Premier Gladys Berejiklian direct without delay, and urge her to reconsider these destructive laws," said TEC's senior campaigner, Corinne Fisher, today.

With just days left before the state government pulls the plug on protections which have safeguarded NSW native species, top soil and our waterways for over a decade, The Total Environment Centre is not the only stakeholder sounding the alarm. 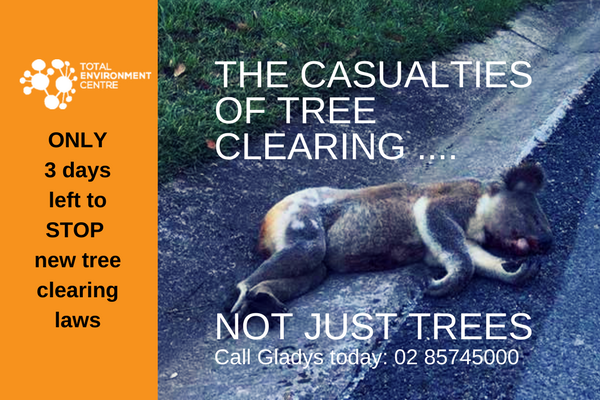 The Royal Zoological Society of NSW describes the new laws as "a major retrograde step for biodiversity conservation."

In it's submission, the Law Society of NSW identifies "serious concerns that regulatory instruments exhibited disclose that there are a number of areas where detail has not yet been finalised or made public including, in particular, regulatory maps."

Councils have also expressed concern "that the new [land clearing] system is highly complex, and rather than simplifying processes, the system has created more complex pathways and options for approvals for land clearing.  Significant concern exists that this may lead to a weakening of biodiversity protection at a local level and fail to achieve a ‘no net-loss biodiversity outcome."

Last week the Australian Senate agreed to write to the NSW Government to request a delay in the commencement of the laws until the associated regulatory mapping has been completed and the biodiversity offset scheme meets Commonwealth standards.

"Despite these concerns, however, it is blatantly obvious that the only stakeholders driving the Government’s actions are those that can’t wait for the laws to come in to start clearing what they previously weren’t allowed to clear," said TEC's Executive Director, Jeff Angel.