Energy Policy in Australia continues to suffer from ideological objections to market and environment based analysis...so what does the National Energy Guarantee really mean for our future?

TEC has welcomed announcements last week from the ACT and Queensland governments that they won’t back the National Energy Guarantee - the Turnbull government proposal to merge climate and energy policy - unless it cuts carbon emissions.  However, we expect all states to go further and reject the NEG in August unless Malcolm Turnbull can deliver an emissions target that will actually cut emissions.

The National Energy Guarantee would force electricity retailers to ensure minimum standards of emissions reduction and reliability of supply.  Evidence from recent weeks shows that Turnbull's existing target means that under the NEG not a single renewable energy project will be built anywhere in Australia for whole decade.

There is absolutely no reason for the states to help Turnbull implement a plan that will do literally nothing new to cut pollution or power prices. 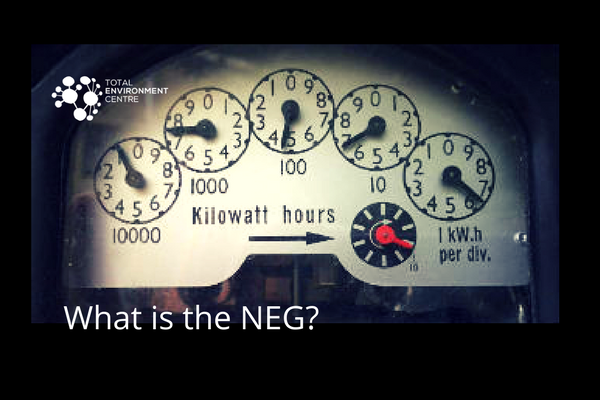 In August states like NSW, Tasmania, South Australia and Victoria are expected to join their colleagues in Queensland and the ACT, to demand that the Turnbull government comes back with climate targets that will actually cut climate pollution and drive investment in new renewable projects.

Labor states also say they will withhold final support for the NEG until they are assured a successive government will not be blocked from ratcheting up carbon savings.

Kerry Schott, the chair of the Energy Security Board, the expert board advising the federal Coalition on its signature energy policy, told Fairfax Media that such a change was "part of your normal course of business". She said it would not be a "big drama" for the electricity industry if a future Labor government enforced far stronger cuts to greenhouse gas emissions.

Environment and Energy Minister Josh Frydenberg on Friday won support from the nation's energy ministers for the Energy Security Board to keep developing the plan, which promises to end a decade-long political deadlock on energy policy.

However he is refusing to budge on key sticking points, including raising the emissions reduction target, which is in line with the Paris climate agreement - meaning the future of the policy is far from assured.

On Saturday, The Guardian referred to "the great, persistent, internal unreason that descends within the Coalition whenever the words carbon abatement are uttered," as the reason "the government has locked itself out of conventional policy approaches, so it had to conjure up something entirely new, and when you are a government trapped in that universe, the policy will reflect the compromises you’ve had to make to get there."

Frydenberg is also being shadowed at every turn by Tony Abbott. Abbott, more than any other person, "has created the energy mess Australia finds itself in" said Katherine Murphy in the Guardian. "You’d think his previous miscalculations might trigger a bout of quiet introspection, or even remorse, but no such luck. Our former prime minister is nothing if not relentless, always up for another round of virtue signalling, followed by vandalism."

So the NEG isn’t perfect, nor has comfortable support in the party room.

Experts including Anna Skarbek from ClimateWorks Australia at Monash University have argued if the electricity sector was not required to do more, then others like farmers and the transport industry would be forced to do extra work.

Frydenberg today confirmed that the policy will not prevent states from pursuing their own more ambitious renewable energy targets. But he said the overall emissions reduction target for the electricity sector will not be increased beyond 26% by 2030 - creating a disconnect.

“States can knock their socks off with their own renewable energy schemes, as long as they meet their reliability obligations under the National Energy Guarantee,” he said.