The Australian reported today that some retailers have blamed plastic bag bans for a loss of sales, imperilling the economy.  What’s worse the Commonwealth Treasury gave credence to the reports by putting it into an official submission to the Treasurer. 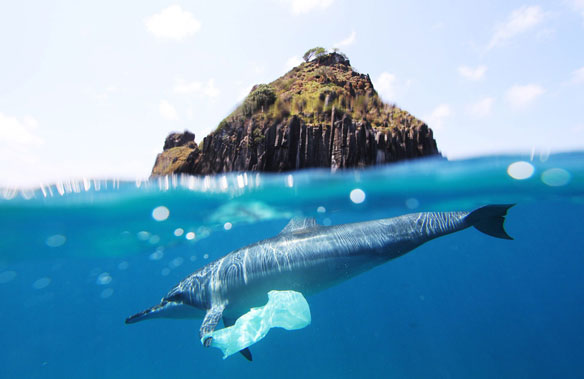 Sounds ridiculous but it’s the type of nonsense we can expect from companies that are only focused on the very short term and have little or no concern for the environment.  Plastic bags are in the top three threats to marine life fore entanglement and ingestion, according to a recent international review of research.  They then breakup into millions of pieces of microplastic entering the food chain.

Reporter Michael Roddan said the Treasury documents obtained under freedom of information laws showed “Australian businesses have warned Treasury that bans on plastic bags are contributing to the weakening economy as shoppers are unable to carry large amounts of groceries to their car or home, confidential briefings reveal.  A slew of companies also complained to the government’s chief economic department about the effect that banning plastic bags was having on slowing activity in the $320 billion retail sector.”

“Several firms suggested that the introduction of a ban on plastic bags meant customers reduced their consumption to an amount that they could instead carry, and delayed purchases of heavier groceries,” notes the report, sent from Treasury economist Angelia Grant to Josh Frydenberg and his assistant ministers on April 2.”

Fortunately sensible economists and the National Retail Association which has strongly supported the bag bans have put some balance into the debate.

“UNSW Business School professor of economics Richard Holden said if there was a shift towards consumers buying fewer groceries it was likely they were forgoing purchases of unnecessary items. This would benefit workers by leaving them with more money to spend on things they actually need while not adding to the growing amount of food waste across the nation, he said.”

“Professor Holden also said the inclusion of the claims in the Treasury submission raised questions as to how trusting public servants were of arguments put forward by industry representatives in forums such as business liaison programs.”

“It’s hard to believe there will be a macroeconomic effect from plastic bag bans,” Professor Holden said.

“If you ask anybody what they think about policy A or policy B, they’re going to tell you something that’s both from their own perspective and that’s in their interest. If anything, we ought to treat those messages in these programs critically, rather than just taking it as gospel or something businesses are telling us in good faith.”

Dominique Lamb the CEO of the National Retailers Association countered in an ABC radio interview this morning that the downturn in sales has been occurring for sometime and there are many others factors impacting on retail sales.

Australian Prudential Regulation Authority member Geoff Summerhayes on Friday said there was an unavoidable short-term economic cost involved with the transition to a more environmentally friendly economy, but that avoiding any sort of mitigation would also carry longer-term costs.

Treasury’s endorsement of these frankly stupid claims by some retailers won’t stop TEC and the Boomerang Alliance from campaigning for the bag bans including the thicker versions; and pushing NSW, the last state to act, into a comprehensive ban.