Those big, old trees must be protected

Sue Salmon, an esteemed campaigner who worked for the Australian Conservation Foundation and in the Commonwealth Parliament, has returned to her parent's farm and is now witness to the destruction being wrought by the NSW government’s land clearing laws. She is fighting to save them and has local supporters. 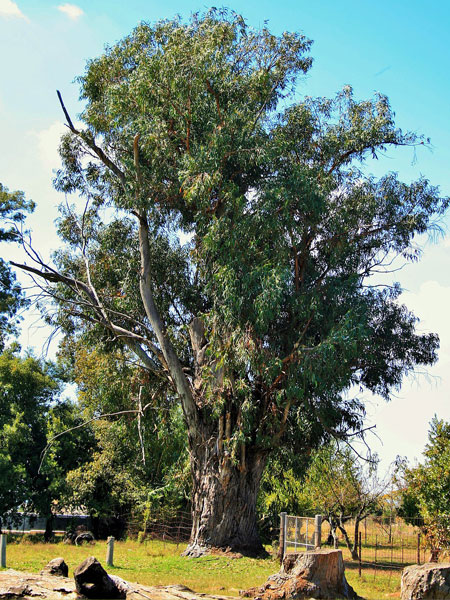 I'm one person in one small area of the state and all around me huge old paddock trees are being destroyed.

On a recent Friday I was driving south along Millwood Road to its junction with the Old Narrandera Road and on the eastern side in the paddock a single Eucalyptus meliodora (Yellow Box) several storeys in height was fully alight. I pulled to the side of the road to be sure of what I was seeing. It was a perfectly clear night so lightening was not the cause.

Two days later I drove north along the Millwood Road. The landholder was at the site of the burnt tree, making sure it had completely burnt, which it had. Yellow Box trees are renowned for the wonderful firewood they provide. Now all the evidence that tree had ever existed had been removed. It had stood the five decades since I'd attended the small school at Millwood and undoubtedly for many years before.

Several months earlier along Millwood Road East at approximately 1.5 kilometers from its junction with the Old Narrandera Road a new landholder knocked over a large number of tall dead paddock trees which had stood for a long period. Trees such as these provide nesting hollows for many species such as the Superb Parrot and are irreplaceable as habitat.

On the property directly south of where these dead trees were destroyed, yet another landholder has established three pivot bores and to do this he has removed a significant number of large Yellow Box paddock trees all several storeys in height. In one small paddock alone there were a many as eight of these large trees. This landholder hasn't only destroyed trees on his land but is constantly clearing up and burning the roadside timber on both sides of the Old Narrandera Rd for the length of his property.

Further west along the Old Narrandera Road on Bulls Run Station, owned by Paraway Pastoral Company they plan to destroy 130 magnificent old Eucalyptus that are scattered throughout the landscape. These are trees that have stood for many hundreds of years during Wiradjuri occupation, ownership by HV McKay and the Duke of Westminster until the Paraway Pastoral Company’s plan for "a farm development project." Probably at the behest of the Local Lands Service they are planting 2,800 offset saplings in a time of drought so their survival is not guaranteed. If they do survive they will need hundreds of years to provide the full range of services these majestic trees currently provide.

On the southern side of the Murrumbidgee River the landholder there has knocked over 6 very large old River Red Gums in the first six months of this year so he can establish a pivot bore. This activity is taking place on the flood plain in squirrel glider habitat. The same owner is planning a second pivot bore and will destroy more old trees to do his second project. He is also in the habit of burning old trees at night in winter.
Recently landholders at Bethunga have described the total destruction of a large number of well-established Eucalyptus paddock trees for precision agriculture as "a national disgrace".

(Sue is lobbying the government to stop the destruction and calling for the land clearing laws to be reviewed. TEC is giving her support.)