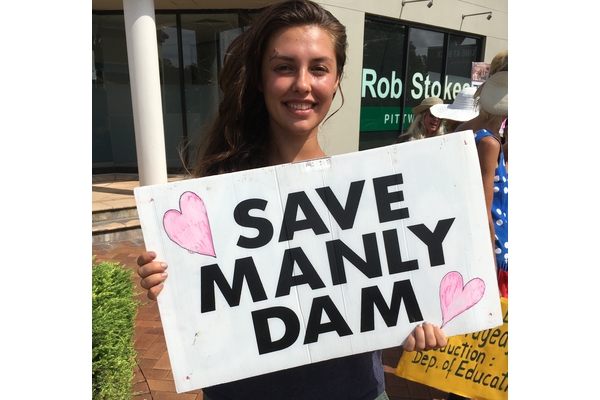 Written off as "Green fringe lunatics",  the Manly Vale community is pushing back with a renewed request for Education Minister Rod Stokes to reconsider the demolition of a treasured area of bushland to accomodate the expansion of the local Public School.

A rally outside Rob Stoke’s office in Mona Vale on St Valentine's Day this week was well attended. One of the protesters, Mrs Helen Kvelde, who went to the school along with her daughter, said the group was “devastated but also very angry” at the news last week that the expansion of Manly Vale Public School would go ahead.

"It was said that Mr Stokes had spoken to all the stakeholders,” she said. “Nobody has spoken to us, not at all. We’ve just been written off as this little fringe group of green lunatics.”

Mal Fisher, also from the Save Manly Dam Catchment Committee, said "a win win outcome could be achieved if Stokes would listen to reason and simply realign proposed new buildings so that their impact would be less environmentally destructive."

While Mr Stokes confirmed that a last-ditch attempt by the Northern Beaches Council and the committee to save 3.65ha of bushland had failed, Council administrator Dick Persson criticised the decision as a loss for the community.

“This is a rare haven for plants and animals that generations of children and parents have nurtured for decades,” agreed Jeff Angel, Total Environment Centre's executive director. TEC has provided ongoing support to the community through our SOS Green Spaces Campaign.

“After suggesting last week that he might rethink the proposal, Minister Stokes announced on Monday that he intends to proceed with the destruction of a threatened species habitat the size of six football fields.”

Mr Angel pointed out that up until now, the Manly Vale Public School “has been recognised for protecting this land and incorporating it into its education programs. Minister Stokes and the Department of Education are overseeing the destruction of a legacy.”

The NSW Government’s decision to proceed with the development comes despite the opposition of the Northern Beaches Council and the local community, concerns over traffic and bushfire hazards, and along with numerous alternatives being proposed.

"The community’ is in deep mourning. The people’s love for this piece of bushland, the presence of threatened fauna and flora and an endangered ecological community, hasn’t been enough to stop the bulldozers.

“It sends out a warning to the community at large that the NSW Government can get away with vandalism against our natural assets anywhere,” Mr Angel said.