Wind and solar have ushered in "a construction-jobs-and-investment boom”, says a new report. What could possibly stall such ground-breaking progress?

"Renewables are the future," said TEC director Jeff Angel today. "Government needs to do all it can to foster maximum growth if it wants to respond to the direction the electorate is already taking."

Today The Guardian reported that renewables accounted for 17.2% of national electricity output last financial year. This jumped to 18.8% last month. It made up just 7% a decade ago. 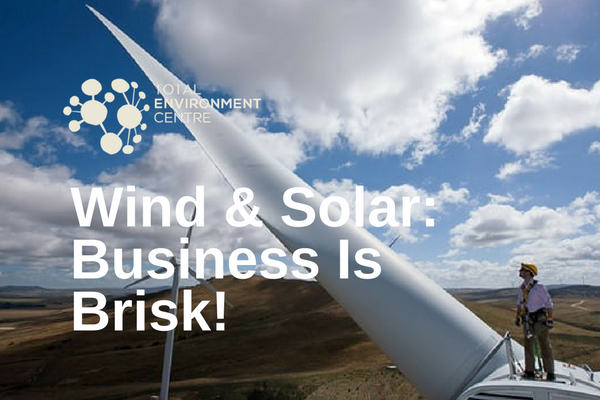 Edis said investors had “recovered their confidence under Malcolm Turnbull”, with help also from “a range of state government initiatives”. The sector will generate enough power to run 90% of homes once wind and solar projects under construction in 2016-17 are complete.

The renewables sector is  also on track to meet the federal government’s renewable energy target of 20% of total generation by 2020 over a year early, by the end of 2018, and solar systems will also save consumers $1.5 billion off their electricity bills over the next 10 years.

As well, SMH noted that at least 46 large-scale energy projects under construction by the end of June were providing enough work to employ 8,868 people full-time for a year. This figure had surged to 10,000 by July. Most jobs were in NSW (3,018), thanks largely to wind farms, while Queensland (2,625) was next, with 70% of its jobs coming from solar farms.

Observers have warned however that "boom could turn to bust" unless the government adopts a clean energy target, which would provide investment certainty beyond 2020 when the renewable energy target peaks.

"Clearly the Turnbull government is experiencing internal inconsistencies," said Jeff Angel, "which nullify its capacity to promote the best business models and give Australians the vision we need for a viable 21st century energy system.

"If the clean energy target ends up a dog's breakfast by including polluting power, then this government will be condemned by history as a barrier to Australia's clean green future. The political blinkers must come off!"

The Financial Review suggested that Australia "desperately needs a nationally consistent energy and climate change policy, with bipartisan support. Sadly, politics and ideology are delivering precisely the opposite, and the result is high prices, unreliable supply and rising greenhouse gas emissions."

"It reveals [ that] public support for renewables has been resilient in the face of many political attacks," she said.