Saving Sydney's Koalas! A small local council has convinced a big developer about to impact the character and landscape of Western Sydney to incorporate koala protection in all future developments. Congratulations Wollondilly Council!

The summit followed a 13,000-signature petition presented to the State Government calling for more protection for koalas and to repeal the rezoning of the South East Wilton development until a local koala protection strategy is in place. Speakers and panel experts at the summit included the Total Environment Centre, Office of Environment & Heritage, World Wildlife Fund, Wollondilly Council and the National Parks Association.

“We need to establish better working relationships with government agencies," said Council’s environmental education officer Damion Stirling. “The Roads and Maritime Service, Department of Planning, local government and the Office of Environment and Heritage need to all be at the same planning table.

"The attendance from developers shows they are keen to listen and want to work out better outcomes,” he said.

Wollondilly Council had planned to take the Planning and Environment department to the Land and Environment Court after its decision to rezone the Wilton South East Precinct to allow Walker Corporation to begin the Wilton New Town development.

Council had raised issues with the development infringing on a section of the Allens Creek Koala Corridor.

But since Walker agreed to modify its development to not impact the corridor, council has decided to drop its court case with the Planning and Environment Department after Wilton developer Walker Corporation agreed to work with council on a number of koala protection measures. 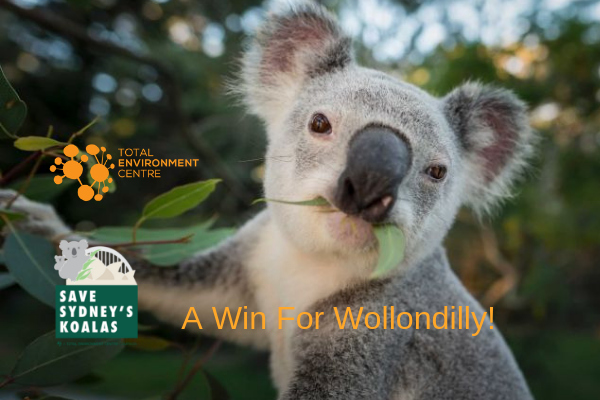 In a joint statement council and Walker announced they will sign a deed of agreement committing to the creation of a koala habitat restoration plan, fencing around koala habitat areas, a koala monitoring program and upgrades to culverts to allow safe koala crossing on roads and other measures.

Walker will follow the agreement for all of its developments across the region.

The developer had previously agreed to retain all vegetation in the Wilton South East Precinct, which makes up 40 per cent of the land.

Wollondilly Mayor Judy Hannan said the agreement was the result of negotiations and hard work between council and Walker as well as strong community support.

“Our intention from the outset has been to secure the future of the koalas,” Cr Hannan said.

This agreement sets in place a wide range of measures that will make sure any development that takes place near koala habitats will have no negative impact on the colony.

“The community and council have fought hard for the koala colony through a vigorous campaign and we are pleased to be putting these protections in place today. This agreement between council and Walker shows what the community and developers can achieve when they work collaboratively together.”

Walker Corporation executive planner Gerry Beasley said the agreement put Walker’s commitments to the koala colony in writing and set a major milestone for other developers in the region.

“The Macarthur koala colony is critically important to both the community and Walker and we will do everything we possibly can to make sure we are supporting the koalas into the future,” Mr Beasley said.

“We will work closely with the council, the NSW Government, agencies like WIRES and our ecological experts to get the best outcomes for the colony.”

Mr Beasley said koalas made the area special and should be enjoyed by the families who will one day call Wilton home.

“We believe, with careful consideration and investment, we can deliver this community and improve outcomes for the koala colony,” he said. “We want to set a benchmark for koala-friendly development that we can continue for future development in this region.”

For local koala lovers “the big question people wanted answered was how to reduce roadkill?” Mr Stirling said at the Summit. “Secondly, they wanted to ensure there were efficient koala corridors with buffer zones across the region.”

The Macarthur National Parks Association has documented multiple generations from the one family who lived in the region.

“The association has collected data on koala movements for 27 years,” Mr Stirling said. “Koalas move in different directions and (that is) important information when planning koala corridors.”

The state government’s Save Our Species program will spend $1.1 million on wildlife protection fencing on Picton Road, between Cascades Creek and Allens Creek.

Walker Corporation has also brought on board EMM Consulting’s Dr Steve Ward, an eminent ecologist with a history of work in the Macarthur region to support the work Walker says it is doing to secure the koala colony.

“It is important that the local koala colony maintains good connections to allow animals to move and find breeding partners,” Dr Ward said.

“A serious issue facing the colony is road crossings. This agreement introduces significant, positive mitigations to help the colony move through the region safely.”

Many locals are not reassured by the Walker agreement for the Wilton development. They cite a lack of public transport in the area, very limited local employment, no public high school, 30km to the nearest hospital, gridlock on the Hume Highway way and Picton Road, and the fact that all this housing is going in next to the water catchment.

For the moment the councillors and staff are looking forward to hearing the council’s koala petition debated in state Parliament on Thursday, September 27.