We have the solutions! We must cleanse our ecosystems of the pollution poisoning our land, food and water...

Everyone agrees we need to recycle more; avoid waste; and that plastic pollution has to go!

Already the next generation is speaking up for the earth. Waste Not is their mantra.

We can create a bright new world of green jobs, clean energy, maximum resource efficiency and zero waste with a circular economy that builds sustainable prosperity for all future Australians. So what's the hold-up?

For almost 2 decades TEC has pushed for recycling infrastructure for all Australian states. We finally got Container Deposit Legislation in 2017 in NSW and now this has spread to all states. We are currently campaigning hard with our sister organisation the Boomerang Alliance for action on plastic pollution and other consumer waste issues to solve Australia's recycling crisis.

Together we can do this, with a coordinated effort from individuals and industry, with the full support of government, we can conserve resources and stop the waste. But where is the plastic tax, where are the regulatory controls on excess packaging, and the incentivised alternative compostable solutions?

Beach clean-ups have mobilised communities across Australia, but they are catching plastic waste at the wrong end of the problem. Look in the gutter outside your home, your office, your community centre. It is filled with plastic rubbish sliding into the stormwater drains on its way to destroy our oceans.

Our environment ministers need to get cracking. Banning single-use plastic bags (with NSW the last state to implement a ban in June 2022) is a start but with millions of tonnes of rubbish dumped into our oceans - the largest and least expendable ecosystem on the planet - the situation now calls for more comprehensive action. Bans on the multiple single-use plastic items are now rolling out around the country, led by South Australia, ACT and Queensland. Plastic Pollution Reduction Plans and Plastic Action Plans are becoming the norm, including the Federal government and even a Global and regional Plastic Pacts.

If we want to survive and have healthy oceans, these changes are essential. We'd like to see Australia become a world leader in circular economies. 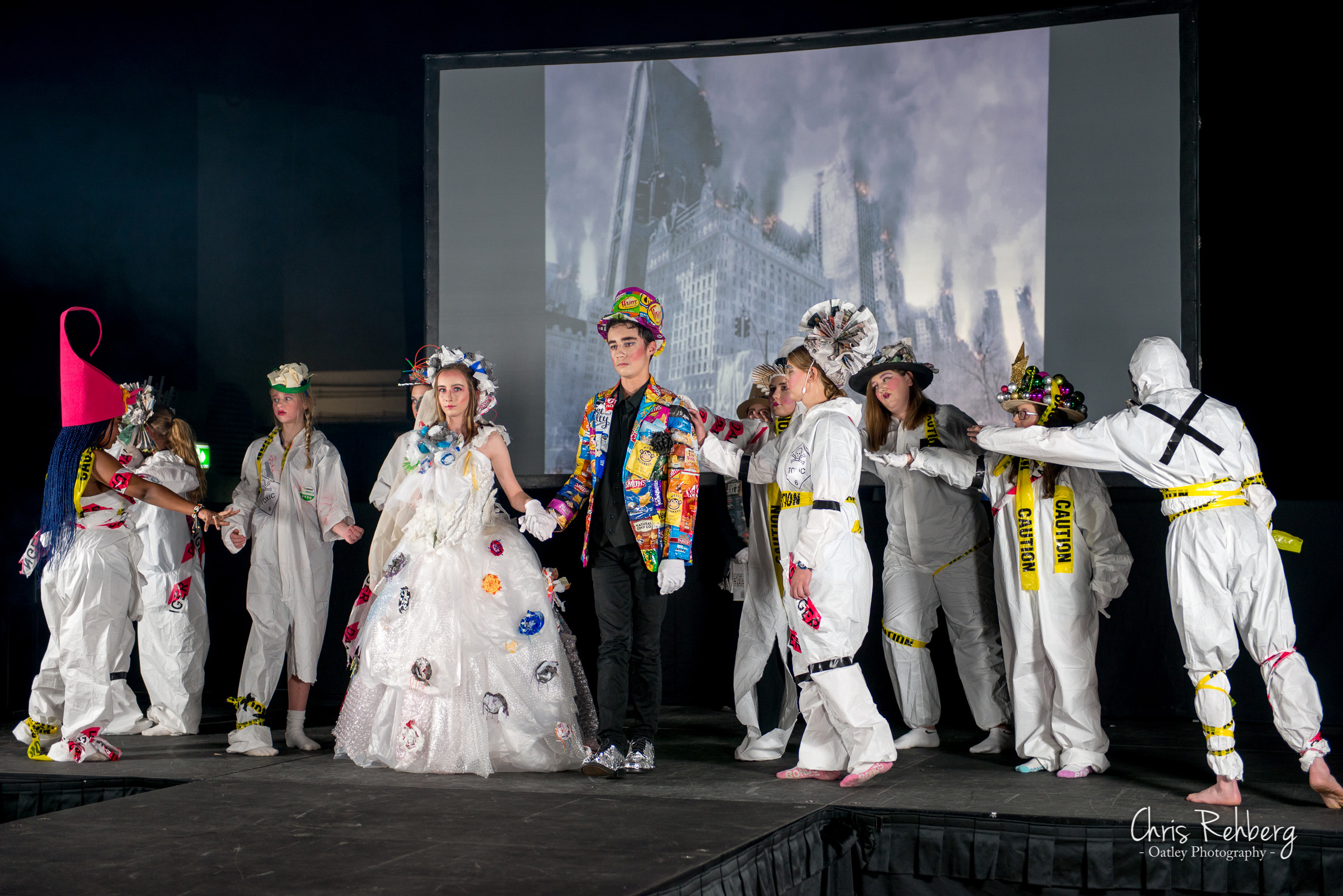 Students of Engadine High School parade their prize winning trashion for the Mash It Up 2018 competition: Dumpster Wedding For A Wasted World

Students of Nepean Creative Performing Arts High School parade their prize winning Mash It Up Trashion for 2018: Game of Throwns.

The End of Plastic Pollution - trillions of pieces of plastic are moving through the planet's critical aquatic ecosystems. In Australia alone, an estimated 600 billion pieces of plastic currently infest our waters, and kill marine life. As micro-plastics move up the food chain, and onto our dinner plates, a ‘major health crisis’ is unfolding. Our solutions are based on getting that plastic out of the loop including by introducing refund schemes for drink bottles and cans (CDS), and insisting on a ban on single -use plastic bags (endorsed by the bipartisan 2016 Senate Inquiry); and more recently banning single-use items in the take away food sector (check our Boomerang's Zero Plastic Pollution campaign). We also host and manage the hugely popular work of Australia's peak zero waste NGO, the Boomerang Alliance of 55 groups.

What you can do: