It’s not a choice between jobs and the environment, but how to transition in a way that manages inevitable dislocation and also prevents ongoing, damaging and serious environmental impacts on present and future generations. This is the challenge for the new federal and NSW ministers for the environment and industry.

Many years ago, when I was a young environmentalist who had just completed an economics and politics degree, I was pleased to read an article in the Sierra Club journal about jobs and the environment. Amid stunning photos of America’s wild lands was a report on the hundreds of thousands of jobs created by new environment protection and pollution laws. Just as we have seen in the recent federal election, the US debate was about pitching jobs against the environment with polarised politics aimed at stymying progress on saving nature.

In a little publicised study released this year, the NSW Innovation and Productivity Council assessed the environmental goods and services sector. The activities involved include delivering waste, water and energy management; and biodiversity, landscape and climate services. It found the number of jobs generated as 152,000 larger than the total number of jobs in agriculture and mining combined. Importantly a significant number were in regional areas and the vast majority of businesses, small to medium size. With a 6 per cent growth rate, the environmental goods and services sector was already contributing $43.9 billion a year across the economy.

Notably the study did not include tourism jobs, many of which are based on our magnificent natural assets found in national parks. There are more than 50 million visits a year, with Destination NSW finding more than $20 billion is spent on nature based tourism generating tens of thousands of jobs. So, protecting the environment is not a job destroyer. It’s the opposite. But what has caused this positive situation?

To the chagrin of some on the "let the market run free" side of the political debate – a major influence has been government regulation stimulating investment and innovation. Mandatory renewable energy targets are one example.

Another is the NSW Energy Savings Scheme, where electricity retailers are required to meet escalating targets helping business, industry and households save energy (and have lower bills). The Council notes the government law created a competitive market to deliver energy savings at least cost, resulting in NSW now leading the world in the wide-scale adoption of efficient lighting.

A more recent development has been "return and earn" providing refunds on drink bottles and cans. Originally decried by major beverage companies as a tax on consumers that would cost jobs – the evidence is that more than 500 new jobs have been created. None have been reported lost. The state’s Pricing Regulator has also found minimal cost impact; and when you return your drink container for the 10 cent refund, you are saving on the purchase price.

This does not mean that these jobs are replacing employment in the extractive industries, but rather at a macro level there is a social and economic benefit. The issue confronting policy makers is transition as one industry declines and another grows. Some skills are transferable but more deliberate assistance programs are needed.

In the early stages of industrialisation, owners of capital didn’t care about those who were being put out of work leading to widespread dislocation and poverty. Corporations and governments also ignored the environmental costs, which had real health impacts for the majority of the population. The rise of environmental concern has translated over many decades since the 1960s into measures to reduce pollution and loss or degradation of soil, biodiversity and water resources. We are still grappling with these, not least of which is global heating.

But our economy is able to generate income to facilitate transition to a greener world. Yes, that is the result of present day economic practises - however, we are now trying to also catch up on the environmental debt with a more complex set of social and physical challenges.

It’s not a choice between jobs and the environment, but how to transition in a way that manages inevitable dislocation and also prevents ongoing, damaging and serious environmental impacts on present and future generations. This is the challenge for the new federal and NSW ministers for the environment and industry. 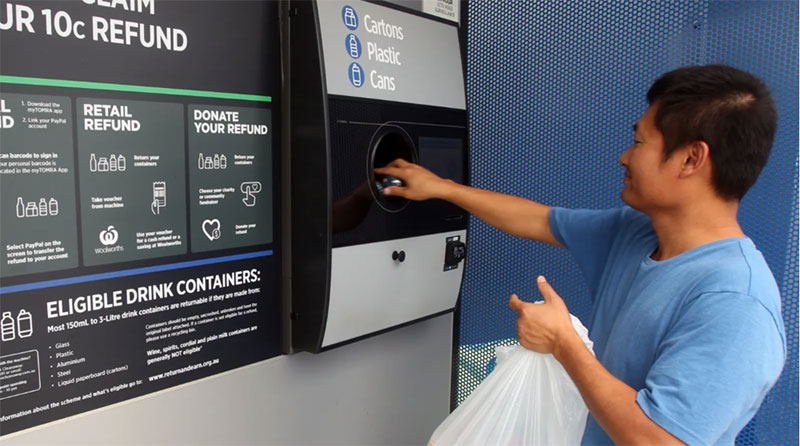 A container-deposit recycling booth in Sydney. The evidence is that the 'return and earn' scheme has generated more than 500 new jobs. CREDIT: CHRIS LANE

We know there are many jobs in the green economy – NSW has shown this. Income and job creating services that protect the climate will grow if government allows it. Establishing a local reprocessing industry for our recycling is also essential. Asia has rejected our kerbside recyclate and we can’t just dump or incinerate it here. On the optimistic side, we have a new federal Minister for Waste Reduction in the environment portfolio, the first in Australia’s history; and state ministers are grappling with how to embrace the circular economy where resources are not wasted.  Let’s dispense with the slogan of jobs v the environment and get on with doing both.

Jeff Angel is the director of the Total Environment Centre.