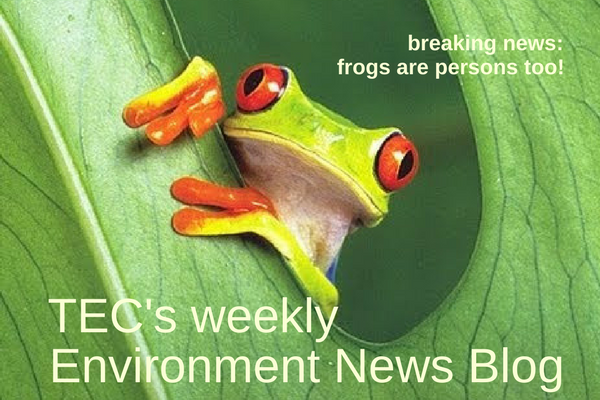 Frogs versus cane toads? The highlights of this week's environment news round up from TEC's weekly radio program Monday Drive 89.7fm.

Anyone who expects the media to tell the whole story isn’t living in the post-fact universe.  Just ask the thousands of American scientists who hit the streets in Boston last weekend protesting the Trump Administration’s rejection and active repression of fact based scientific analysis. In Australia we are blessed with a vocal, hard working, independent spectrum of media, so many facets of any given story usually get an airing. At 89.7fm we do our bit, so we decided it was high time to air the herculean efforts of young people in the Muslim community this Clean Up Australia Day.

It didn’t get much publicity but as Waqas Ahmad  from the Ahmidiyya Muslim Community told us, thousands of young Muslims got out there and picked up so much rubbish they took out the top 4 positions for most volunteers and most money raised for Clean Up Australia this year. Ahmidiyya is the leading Islamic organisation to categorically reject terrorism in any form. Over a century ago, Ahmad emphatically declared that violent “jihad by the sword” has no place in Islam, and Waqas explained that Ahmidiyya followers today practice moderation and restraint while endorsing the separation of mosque and state. So listen up One Nation. We spoke about the traditional attitudes to the environment in Islam which has used the natural world as an inspiration for it’s sublime architecture and scientific investigations for thousands of years. Originating amongst desert people, trees have long been revered, so it’s no surprise the Ahmidiyya community will be out there again on National Tree Day.

After some hits from Sampha, Solange and The XX, we got stuck into the Transitions Film Festival which is now Australia wide after starting in Melbourne. Luke Taylor, the Director of the Sustainable Living Foundation for over a decade, joined us to discuss his favourite films in this year’s program. The festival’s fascination with the rapid transformation of industry, technology and society we are currently experiencing, which even outpaces the changes our grandparents saw from horse power to the exploration of outer space (not to mention the emancipation of women in some western countries), allows for a wide spectrum of topics for audiences – from raw food veganism to the dark facts behind the global chocolate trade. Director Josh Fox made a huge impact when he visited Australia with his first film Gasland in 2010, which gave the local anti-fracking lobby a healthy boost. Transitions is screening his new film How to Let Go Of The World and Love All The Things Climate Can’t Change, tonight at the Cremorne Orpheum at 6.30pm.

Then we attended to some breaking news for cane toad watchers and others concerned for Australia’s biodiversity which faces many threats from introduced species to land clearing at a time when government regulation has been weakened when we need it most. Non-lethal cane toad sausages are being used in Kakadu National Park to teach Northern Quolls not to eat the toxic toads, and small cane toads and tadpoles are being released in the Kimberley with the same aim. But because goannas, king brown snakes, and freshwater crocodiles gobble them with abandon, these creatures have suffered population reduction by up to 95% in some regions. Nevertheless Professor Rick Shine from the University of Sydney says most native species are keeping a safe distance, and the toads are nowhere near as big a problem as feral cats. Tree snakes and frogs are never tempted. Good to know.

Elsewhere up north, we reported that the Cairns’ Frog Hospital is looking for donations and volunteers to help find a new home in an area that hasn’t been sprayed with pesticides. Some critics say saving individual frogs after lawn mowing accidents for instance is a waste of time given frogs reproduce in large numbers, but as the Frog Hospital’s founder Deborah Pergalotti says, “each individual tells us what is going on in the environment”. Personhood is a thing for frogs too, and they are extremely sensitive to toxins, viruses and climate change. Next week we’ll be talking to the president of the Frog and Tadpole Society, Dr Arthur White about a road construction project south of Nowra which is threatening gold and green bell frog colonies. Why do we need frogs? Dr White will tell all.

We also reminded our lovely listeners about the City Of Sydney E-waste drop this Saturday March 11, and issued a renewed warning about synthetic fibres and their impact on our ecosystems. Along with the dust from tyres would you believe, particles washed off our clothes are contributing to a growing toxic plastic soup in the planet’s waterways. 9.5 million tonnes of plastic gets into our oceans each year, and up to 31% is invisible.

On a bright note we covered the conservation efforts of the Karen tribes of Myanmar, which fought the ruling military junta for decades prior to the election of the NLD in 2015. The upside to this vicious civil war was the isolation of forests in the Karen state, where populations of tigers, leopards, elephants and bears have continued to flourish while dying out across the rest of Asia, where “empty forest syndrome” has brought biodiversity to a standstill. In Thailand, Karen tribespeople have swapped growing opium for organic strawberries and are prospering. Their Northern cousins are up against an influx of illegal wildlife traffickers, loggers and recreational hunters as they struggle to protect the “spirit” animals of their forests.  The Karen Environmental and Social Action Network honed their skills fighting SLORC. Their precious tigers and hornbills couldn’t be in better hands. But this is a struggle for survival, including ours, going on all over the world, even in NSW where hundreds of communities are fighting to save their parks and trees, let alone native species such as koalas, frogs and quolls.

To wrap up Riley Lavelle Long gave us a review of In The Valley of Violence starring Ethan Hawke and John Travolta. It went straight to video but it’s certainly worth listening to his amusing review.

We also welcomed Olana Osborn to the Monday Drive Team. Olana is from Tennessee in the U.S. of A. and told us about the amazing national parks and hiking trails back home, before delivering the What’s On from our Community Billboard. It’s great to have such a lively intelligent young woman with us for the next few months while she studies communications at the University of Sydney. She also has a beautiful voice for radio. Don’t miss it.

Till next week, we wish you clear unpolluted ear drums, gentle vibes and peaceful ambience.

You can listen to the whole show on 89.7fm here or tune in every Monday between 4-6pm.