Would you believe the health of our rivers is seriously threatened by the decline of our freshwater turtle populations? Like all our native species they've evolved as the housekeepers of our ecosystems, and they keep the water fresh and clean. 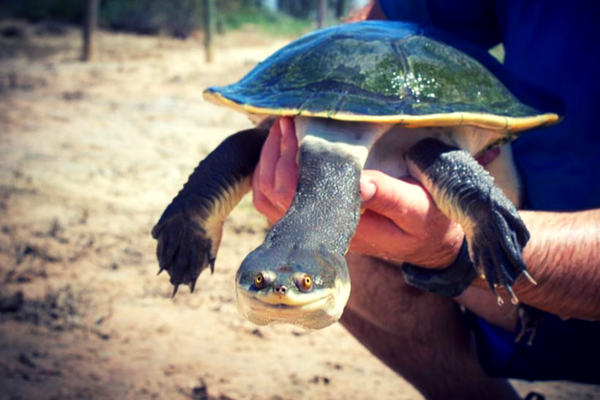 Plastic bags are as much of a menace to our freshwater turtles as their marine cousins! Unfortunately, when we poison the habitat of these species, we are really destroying the building blocks of our world.  #BanTheBag and #NoMoreExcuses hashtags and @GladysB @MarkMcGowanMP and @DanielAndrewsMP

The balance between pure water, healthy soil, and our native plants and animals has evolved over millions of years. With so many invasive pollutants and opportunistic feral predators it's more important than ever to keep habitat intact so native species continue their vital work as the housekeepers of our ecosystems.

More and more research is proving that environment stress has a knock on affect from native wildlife to human communities. Extreme drought is thought to have created conditions in Syria and Iraq for the rise of Islamic State, as well as the Arab Spring in Egypt. It started in Russia where a drought led to wheat shortages in Russia and Ukraine. Russia stopped exporting wheat which led to food shortages in Egypt and in other Arab Spring nations. Riots ensued. The drought spread to Syria where tens of thousands of once prosperous farmers were forced off the land, flooding into cities where there was no work.

The bloody civil war which has destroyed the lives and the futures of millions of Syrians, and is spilling into the surrounding regions, is a direct result of the social unrest caused by environment stress which the Assad regime did not address in time. The leadership the Syrian people so desperately needed in the face of climate change failed to even see the challenge.

Are we doing any better in Australia? We have an energy crisis which renewable technology could swiftly solve if ideology wasn't dragging us back to the 19th century. We have a water management crisis unfolding in Queensland where unlimited access to groundwater has been granted to the proposed Adani coal mine by the Queensland government in a move farmers fear would allow it to drain huge amounts of water from the Great Artesian Basin. The Adani Mine business model will only go forward if its operations are heavily subsided by the Australian government.

And it's pretty clear that rampant land clearing in Queensland under the previous state government, and the ten year drought which is forcing farmers off the land in QLD, are linked.

The NSW Government recently passed new biodiversity laws which land care experts, farmers, and scientists all say will bring about the same conditions in NSW.

This is a predominantly hot dry continent whose native species took millions of years to evolve, adapt and thrive in harsh conditions. Our food and water security cannot be taken for granted. It rests on their shoulders, as well as ours.

If you want to help, join our SOS Green Spaces campaign which is focussed on preserving bushland habitat, parks and tree canopy across our cities. You could also sign the petition we've created with the Stand Up For Nature Alliance which is fighting to stop the mass extinction rates of iconic koalas, bilbys, microbats, and even toadlets, fungi and native grasses.

As for our native turtles? The quality of the water in the Murray River is at risk because of a declining population of turtles, the Foundation for National Parks and Wildlife (NPWF) has said.

More than 40 per cent of freshwater turtle species are in danger of extinction, the foundation says, and although the Murray turtles have been around for over 200 million years, their numbers are now dwindling.

The river is home to three freshwater species including the Murray short-necked turtle, the eastern long-necked turtle and the broad-shelled turtle.

The foundation said the population was being threatened by climate change and salinity but one of the most serious threats was the feral fox.

About 90 per cent of turtle nests are being raided by foxes.

Ian Derbyshire, the chief executive officer of the NPWF, said if we started to lose the turtles, the quality of the water in the Murray River would drop.

"One of the great things that the turtle's do is that they keep it clean," he told 774 ABC Melbourne.

"They go out and scavenge all the dead fish away and the dead animals and everything that sits in the river."

The foundation is doing research to definitively prove that the turtles "don't stand a stand a chance" against foxes, Mr Derbyshire said.

"They're not big turtles like you see out at sea. They're probably less than a foot in size when they're fully grown," he said.

"They're one of the largest biomasses of the river, or they were, and as a result of that you have to recognise how much cleaning they actually did."

The general public can help by protecting nests along the river.

"If people know where turtles have nested, then it's quite simple to protect the nests... [by] laying very wide wire mesh over the top and weighting it down so a fox can't dig it."