Bad for our health. Bad for Business. TEC has called out the NSW government's record of destroying parks, bushland and recreational areas across NSW by directing major infrastructure funding towards toll roads rather than into sustainable public transport projects. 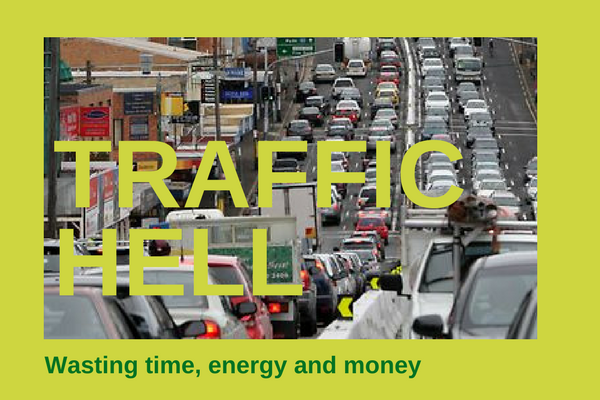 In what TEC director Jeff Angel has described as “a shocking development in myopic transport planning”, the coalition has ignored cheaper, public transport oriented alternatives to the Western Harbour Tunnel project, which is to be an extension of WestConnex, and the Beaches Link tunnel that is to extend that road to the northern beaches, Fairfax media revealed this week.

In fact, the government is prioritising roads over playing fields used by thousands of children and their families, as well as irreplaceable bushland and waterways according to a cabinet directive to excise public transport-based options from planning proposals.

The result is bad for our health and bad for business. Google's decision to withdraw from negotiations to base its headquarters at a repurposed White Bay power station in Rozelle is based on the government's failure to provide public transport upgrades to the Bays Precinct. Increasing road conjestion with no integrated plan to alleviate the pressure, let alone provide Sydney's workers with respite in the form of green breathing spaces, is killing business in Australia's financial nerve centre.

“A government that endorses cars over public transport in this way is so out of touch with a sustainable future for a growing city, it deserves the maximum of public disgust,” said Mr Angel.

Clearly, "the cabinet directive to ignore rail as an alternative is inconsistent with government principles and guidelines and represents a fundamental shortfall in Transport for NSW meeting its responsibilities in achieving value for the state's taxpayers" the report published in SMH said.

Greens MP Dr Mehreen Faruqi said that "by 2019, or even earlier, we will see significant overcrowding and more late running trains. Maybe this is part of the Transport Minister’s strategy to run public transport into the ground then sell it off.

“The Government has deliberately neglected the current rail system," Dr Faruqi said. "Where is the investment in the Sydney Trains network? It seems that they aren’t interested in investing in the network unless they can flog it off."

This short sighted, profit oriented planning is driving Australia in the wrong direction at a critical juncture, as species in every ecosystem are being affected by climate change, including rising temperatures and shifting rainfall patterns.

The latest data from scientists indicates more extreme conditions will challenge many human and animal communities alike, putting extra pressure on our cities to create sustainable refuges for their residents.

We should be gearing up to deal with the new challenges, including urban heat stress, not exacerbating them by destroying green space and encouraging more cars.

Public health does not appear to be one of the state government’s priorities. Heatwaves are already killing more Australians than any other natural hazard. For instance, severe heat in the days prior to the 2009 Black Saturday fires killed more than twice the 173 bushfire fatalities, according to another report. Yet there is almost no medical research into climate change and health on the government agenda.

In terms of expenditure, the Fairfax investigation turned up other worrying anomalies. Given the relatively low cost of the rail option, it could mean the F6 extension will cost multiples of the rail alternative, to the tune of $10 billion.

Apart from mounting traffic congestion which is already a massive problem for Sydney siders, travel times for commuters would also be cut by rail options. A new rail tunnel and freight line from Wollongong to Central could slice 30 minutes from the 90 minute trip, for as much as $10 billion less than the cost of the toll road.

Meanwhile, the world is 33 months into its biggest recorded marine heat wave event, raising the prospect that coral mortality on the Great Barrier Reef will increase "significantly" from the quarter already lost in the past year, scientists say.

This is one of the ocean's largest filtration systems, critical to maintaining robust marine environs. Some reefs in Thailand and Indonesia are also experiencing a third year in a row of bleaching, while Fiji, Niue, American Samoa and our Australian reefs are enduring a second year – "all of it unprecedented", said Andy Pitman, one of 46 authors of a new paper recently published in the journal Nature.

Clearly Australia's climate is getting hotter, the impacts from global warming are escalating, and we need fewer roads, more cooling parks and trees, and a government with an honest, practical plan for the future.

Join our SOS Green Spaces campaign - our network of concerned communities will compel the government and local councils to preserve our green breathing spaces.

Sign the petition we have created with the Stand Up For Nature alliance to lobby the state government to regulate land clearing across NSW, and strengthen laws protecting habitat and biodiversity.